The Root Cause of School Violence: Emotional Illness 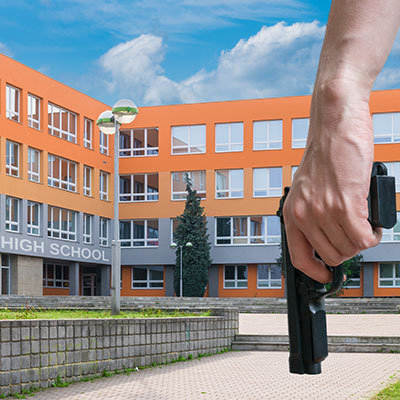 Many of the news channels today have been focused on the latest school shooting. Two students were killed when a fifteen-year-old student opened fire on his classmates at Santa Clarita High School in Santa Clarita, California. The images on the screen seem surreal. Yet, they are all too believable. Once seen as a cultural aberration, school shootings are now a common topic in discussions regarding quality education. Below are my views on the matter.

One of the tragedies of our time is that school shootings are no longer regarded as social oddities. These are now part of our cultural landscape, occurring with increasing frequency and forcing educational gurus, political leaders, and social scientists to struggle with two gut-wrenching questions:

Popular responses to the heart-rending news of a school shooting usually focus on five items:

All five have their advocates, but none speak to the root cause of school violence. Allow me to elaborate:

Mental illness is neurological and organic. It is brain chemistry gone awry. It is manifested in conditions such as schizophrenia, bipolar disorder, and clinical depression–illnesses that are not present in the lives of most mass murderers. A Columbia University study of 88 mass killers, from 2000-2015, revealed that only 33 percent showed signs of being mentally ill. More to the point, a specific study of 157 school shootings, conducted at the University of Southern Illinois Medical School, concluded that only 17% of the shooters showed signs of mental illness.

Because it is a factor in some school shootings, mental illness definitely ranks as an item demanding the attention of school administrators. The May 18, 2018, shooting at Santa Fe High School in Santa Fe, Texas, took the lives of eight students and two teachers. Dr. Jacqueline Shuman was the Assistant Superintendent of Santa Fe ISD at the time of the tragedy and has emerged as a tireless advocate for placing licensed mental health professionals in every school and/or school district. While I heartily concur with Dr. Shuman’s quest, the fact remains that mental illness is NOT the root cause of the majority of school shootings.

Turning a school campus into an iron and glass fortress is not an effective or cost-efficient means of preventing school violence. A shooter can miss a day of school, wait in the parking lot until school is dismissed, and start shooting once a large mass of students has exited the buildings. Shooters will find ways of foiling physical fortifications.

The recent study by the Secret Service’s National Threat Assessment Center shows that most school shootings were over within a minute or less and that law enforcement rarely arrived before the attack was over. At the shooting at Saugus High School in Santa Clarita, California, authorities estimate that the shooter took just sixteen seconds to pull out his weapon, shoot five classmates, and turn the gun on himself. Unless schools are willing to undergo the cost of placing armed personnel in every schoolyard, hallway, and classroom, the addition of a few more officers will not prevent most acts of terminal violence.

Can you imagine the ensuing confusion when law enforcement officers arrive at the scene of a shootout and are asked to distinguish between the shooter and a gun-wielding teacher? Enough said.

Question 1:  What causes kids to kill?

While there are other mitigating causes, some of which are described above, children’s emotional health is the key element in mitigating school violence. So, let’s talk about emotional illness.

In almost all instances, shooters are teens who suffer from an acute emotional illness that reflects heart-shattering feelings of being unwanted and unloved. Shooters usually come from dysfunctional (or non-existent) homes of origin where they were abused or neglected. Nikolas Cruz, the 19-year-old shooter who killed 17 of his former classmates and teachers at Marjory Stoneman Douglas High School in Parkland, Florida, said in his confession that his mother “put him down” and called him “crazy, stupid, and worthless.”

Tragically, an emotionally distraught pre-shooter typically finds no refuge at school where he is ridiculed, ostracized, and bullied. It is this soul-shattering condition of emotional isolation that triggers the feelings of anger and resentment that provoke a child to vent his rage upon his school. As one teenage killer was quoted in Newsweek, “I’d rather be wanted for murder than not wanted at all.”

Question 2: How can we alleviate the potential for violence?

A recent Harvard study shows that a child’s best defense in the face of adversity is a strong, supportive relationship with at least one caring adult. While we may have little, if any, influence over what occurs in a young person’s home, we can take steps to address children’s emotional health through our schools. The school focus should be upon both teachers and parents.

Teacher development programs that help teachers show intentional care to all students can make a tremendous contribution to the positive mental health of the children. We’re not talking about classroom behavior-management programs or student character-building courses; they serve a purpose but are not primarily designed to build positive teacher-student relationships. Schools should provide programs specifically designed to help teachers provide unconditional care and respect to all students so that every child feels valued and wanted.

Schools should also offer programs for parents that help them recognize the need to provide, in addition to food and shelter, the unconditional love and care that promote children’s mental health and a positive self-concept. In particular, parents should be taught how to discipline behavior in a manner that respects and honors the personhood of their child.

The Washington Post surveyed all the schools in its database where school shootings have occurred since the Sandy Hook massacre in 2012. Of the 79 schools the Post contacted, 34 replied with answers, including Sandy Hook Elementary. When asked, “What, if anything, could have prevented the shooting on your campus,” almost half of the schools said that nothing could have been done. Several schools, however, did emphasize “the critical importance of their staffs developing deep trusting relationships with students, who often hear about threats before teachers do.” Teachers call this phenomenon “disclosure,” and it is a powerful tool in the prevention of campus violence.

Students who feel respected and accepted are more likely to handle negative feelings with a spirit of resilience and are less likely to resort to violence. Also, students in caring, trusting relationships with teachers are much more likely to reveal potential problems so that appropriate interventions can take place.

Programming designed to help teachers provide unconditional care and respect to students will benefit all students, not just those with a potential for violence. It is imperative that schools include emotional health programming in their campus improvement plans so that all participants in campus life feel valued, connected, and safe.

Dr G
Dr. B. Glenn Wilkerson is recognized as one of the nation’s foremost authorities in elevating the social/emotional health and creating positive self-concepts in children. Dr. Wilkerson is the author of Trekking: Searching for Love and Self-Esteem, If Jesus Had a Child, and the nationally-acclaimed ARK (Adults Relating to Kids) Program that incorporates research-based, best practices in parenting and teaching.